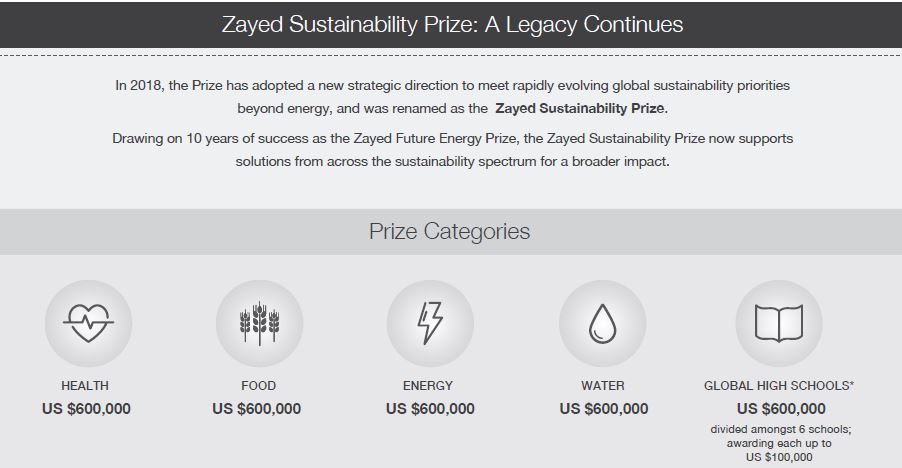 At the 2008 World Future Energy Summit, H.H. General Sheikh Mohammed bin Zayed Al Nahyan, Crown Prince of Abu Dhabi and Deputy Supreme Commander of the Armed Forces of the UAE, announced the launch of the Zayed Future Energy Prize – a tribute to his father, the late Sheikh Zayed bin Sultan Al Nahyan, and his legacy of environmental stewardship and sustainability.

By recognising solutions and technologies that can change the world, the Zayed Future Energy Prize, managed by Masdar, in Abu Dhabi, has rewarded pioneering innovators and visionaries whose achievements have furthered the proliferation of renewable energy solutions.
Over the past decade, the Prize has seen 66 winners positively impact the lives of over 307 million people.
In April 2018, the Prize adapted its focus with a view to affecting greater impact across multiple sustainability sectors. In order to reflect this evolution, it was renamed the Zayed Sustainability Prize.
The Prize is divided into five distinct award categories; they are:
Health, Food, Energy, Water, and Global High Schools.
More info here

Last month, I hosted the first evidence session of the APPG for African Reparations - on the question of restitution.

We heard from museums & culture experts about how we can work to restore artefacts looted under the British Empire to the people they belong to.

In July AFFORD held its annual conference, AD3 2022 ‘Africa Resilience & Diaspora Action: The Challenge of the Ukraine Crisis’. This was a thought-provoking solutions based virtual conference.

Important: The universities of Oxford and Cambridge have agreed to repatriate more than 200 Benin bronze items, paving the way for the UK’s most extensive restitution of Benin artefacts. Need to keep up the momentum ⁦@AFFORD_UK⁩ ⁦@profdanhicks⁩ https://www.theartnewspaper.com/2022/08/01/oxford-and-cambridge-universities-approve-returning-213-looted-benin-bronzes-to-nigeria

For more information and updates on the Return of the Icons Campaign from the AFFORD Institute, follow the link to join the #ReturnoftheIcons Facebook Group.
>>> Related Articles, announcements, research & more!