ABC Webinar: What investors are looking for with Christelle Kupa & Rubelyn Alcantara from Uhusiano Capital (UK) 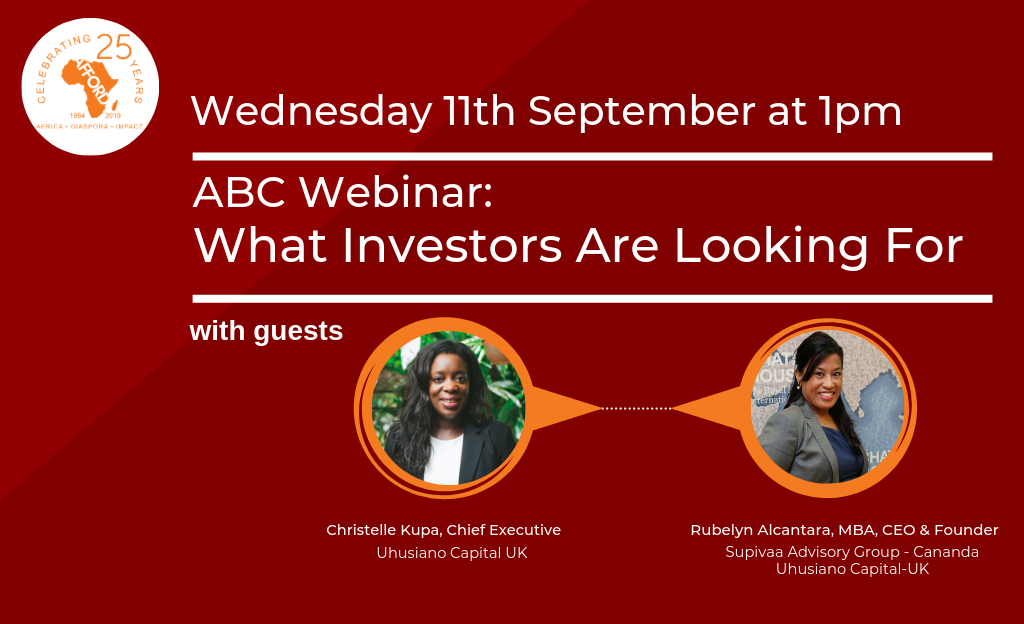 This webinar is free to attend register here

Christelle is the Founder and Chief Executive of Uhusiano Capital which she founded in 2016 as a catalyst to facilitate better business in the African impact investing sector, with a particular interest in agriculture and women economic empowerment. Christelle has convened a team of experts and specialists with whom she has developed service propositions that solve complex problems and add value for communities, stakeholders and shareholders in Africa.

Christelle is an internationally recognised leader in impact investment. She has spoken at high profile events and conferences around the world and has been an expert participant in a number of panels and knowledge-sharing initiatives.

In her non-for-profit activities, Christelle is a practitioner, advocate, and lecturer on sustainable impact capitalism and community bridging through business and bottom-up leadership. She sits as a Trustee on Medical aid film.

Christelle is Belgian- Congolese, based in London, with extensive travel on the African continent. She holds a BA in business and finance and speaks French, Flemish, English, with some basics in Swahili and Lingala.

“Supivaa” is a play on words French/English of “support” and “vivre” (to live) thus “supporting life”. Supivaa also has a second, more fun meaning, “supporting the divas”. Ruby is also an Advisor to Uhusiano Capital, an UK regulated financial advisory firm focused on Impact Investing in Africa.

Originally from Vancouver, Canada, Ruby first stepped foot on the African continent in 2007 and since then, supporting Africa’s economic development has been interwoven her DNA. For the past 7 years, she’s been leading start-ups/projects either in or focused on Africa’s growth in a variety of sectors including renewable energy, agriculture, fin-tech, education, health, and media/publishing.

Ruby has lived and worked across Africa including Tanzania, Nigeria, Madagascar, South Africa, Cameroon, Uganda, Egypt, and Kenya. Early in her career, she worked with both governments and private sector in Africa to promote their respective countries to investors, policy-makers and key decision-makers, by producing reports distributed publications such as The Wall Street Journal, The Economist and the International Herald Tribune (now The New York Times International).

Ruby has played a lead role in companies that have benefited from commercial, impact and/or hybrid investment and as such she’s passionate to ensure that projects and entrepreneurs can get the support they need to hit that critical trajectory for growth and ensuring their investors are rewarded.

Ruby has served as Managing Director of Push Observer, an investment of SixTelecoms Group in Tanzania, where she trebled the company’s client base in less than 2 years with clients including of Vodacom, Diageo, the United Nations, British Gas and the Government of Tanzania.

She was the Chief Marketing Officer at Homestrings Ltd, later known as Movement Capital, one of the first crowdfunding sites focused on Africa.  She was part of the founding team that raised $25 million USD for 35 deals in 12 countries across Africa.  Most recently, she consulted, serving as interim-CEO for a solar energy and agriculture company in Madagascar which is a blended finance/hybrid investment of a private investor and grant funding from the EU.

Today her focus is on working/advising with both the Seekers of Capital (entrepreneurs and fund managers) and the Investors themselves (both Impact Investors and commercial investors) to actualise on the potential of Africa. Often with the Impact lens leveraging on the guidelines of the UN Principles of Responsible Investment (UNPRI) ensuring both ESG and SDG alignments.

Ruby holds an international MBA from IE Business School (Spain), a BA in Communications and Political Science from Simon Fraser University (Canada) and a Diploma in Broadcast Journalism from Columbia Academy (Canada).

Register to attend this webinar here

We are looking for a FT, English & French speaking #Finance and #HR Manager who is creative and full of ideas to support our growing and ambitious work within and commitment to the #migration and #development sector.

Last month, I hosted the first evidence session of the APPG for African Reparations - on the question of restitution.

We heard from museums & culture experts about how we can work to restore artefacts looted under the British Empire to the people they belong to.

In July AFFORD held its annual conference, AD3 2022 ‘Africa Resilience & Diaspora Action: The Challenge of the Ukraine Crisis’. This was a thought-provoking solutions based virtual conference.

Important: The universities of Oxford and Cambridge have agreed to repatriate more than 200 Benin bronze items, paving the way for the UK’s most extensive restitution of Benin artefacts. Need to keep up the momentum ⁦@AFFORD_UK⁩ ⁦@profdanhicks⁩ https://www.theartnewspaper.com/2022/08/01/oxford-and-cambridge-universities-approve-returning-213-looted-benin-bronzes-to-nigeria